Culture on the Battlefields of the Cold War 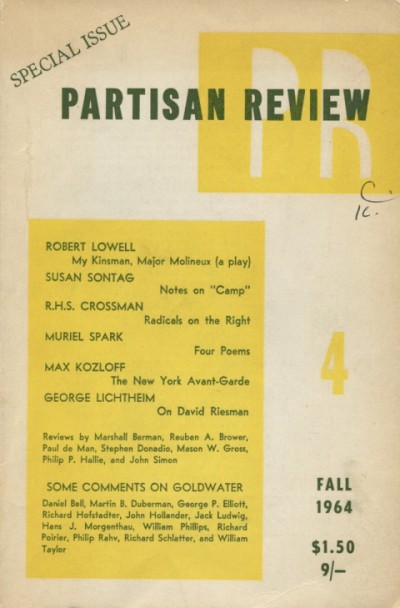 The CIA (Central Intelligence Agency) was “a major player in intellectual life during the Cold War — the closest thing that the U.S. government had to a Ministry of Culture. This left a complex legacy. During the Cold War, it was commonplace to draw the distinction between “totalitarian” and “free” societies by noting that only in the free ones could groups self-organize independently of the state. But many of the groups that made that argument — including the magazines on this left — were often covertly-sponsored instruments of state power, at least in part. Whether or not art and artists would have been more “revolutionary” in the absence of the CIA’s cultural work is a vexed question; what is clear is that that possibility was not a risk they were willing to run. And the magazines remain, giving off an occasional glitter amid the murk left behind by the intersection of power and self-interest. Here are seven of the best, ranked by an opaque and arbitrary combination of quality, impact, and level of CIA involvement”:

Literature as a Weapon

“Words matter. A society’s books and movies impact the world. Books, in particular were often internationally influential during the Cold War. …

The CIA funded the production and distribution of individual literary projects. …

Eric Bennett, a professor of English at Providence College and author of the forthcoming Workshops of Empire: Stegner, Engle and American Creative Writing During the Cold War, wrote that the CIA’s efforts produced lasting and potentially damaging effects.

According to Bennett, the CIA and other conservative organizations actually infiltrated the United States’ leading writing programs and literary journals. The goal was to establish an American literary tradition that would “venerate and fortify the particular, the individual, the situated, the embedded, the irreducible.”

That literary voice would be an alternative to the Soviet Union’s socialist realism — and its selfless heroes sacrificing themselves for good of the revolution.

Soon after Pres. Harry Truman founded the CIA with the National Security Act of 1947, the agency began focusing on the arts.”

From, and continue reading on the CIA role in shaping American literature: isnblog.ethz.ch/intelligence/the-cia-battled-the-kremlin-with-books-and-movies-2

“During the Cold War, it was commonplace to draw the distinction between “totalitarian” and “free” societies by noting that only in the free ones could groups self-organize independently of the state. But many of the groups that made that argument [including literary magazines] were often covertly-sponsored instruments of state power, at least in part. Whether or not art and artists would have been more “revolutionary” in the absence of the CIA’s cultural work is a vexed question; what is clear is that that possibility was not a risk they were willing to run. And the magazines remain, giving off an occasional glitter amid the murk left behind by the intersection of power and self-interest. Here are seven of the best, ranked by an opaque and arbitrary combination of quality, impact, and level of CIA involvement.

Probably the finest literary magazine in American history, the Kenyon Review was founded by John Crowe Ransom in 1939. The intellectuals and CIA officers who ran the Congress for Cultural Freedom loved Ransom, and used him and his literary networks to locate promising students and literary friends that it could recruit to work for it. Even Ransom’s technique of “New Criticism,” seen as a quintessentially conservative Cold War form of analysis because it eschewed examination of the social and political context of literary works, has sometimes been compared to the work of espionage, by which careful reading can unearth hidden plans and meanings.”

From, and more, on 7 Influential Literary Magazines with CIA ties: theawl.com/2015/08/literary-magazines-for-socialists-funded-by-the-cia-ranked

Related: CIA involvement in the shaping of American Literature https://spywriter.wordpress.com/2014/03/14/the-cia-ideology-and-american-literature/

Writers, the Engineers of the Soul 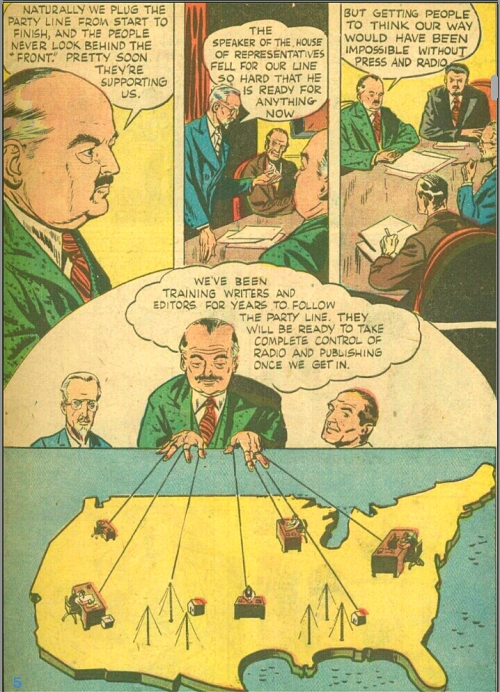 Cold War and the Battle of the Pens

“Were there similarities between the literature on both sides of the Iron Curtain?”

“Definitely. And the phrase itself is an interesting place to start. It is commonly assumed that the term was first used by Winston Churchill in a speech in Fulton, Missouri on March 5th 1946, but in Patrick Wright’s book “Iron Curtain” (2009) he traces the origin to 18th-century theatre. The iron curtain was a safety curtain that came down between the stage and the audience in case of fire. It was the divide between stage and audience and the whole political rhetoric of cold-war literature and its narrative discourse was marked by this profound opposition between self and other, good and evil, democracy and tyranny.”

“The idea of theatricality was the very essence of cold-war literature and discourse—the manipulation of language and information, the difference between appearance and reality, and the way the information was projected to the audience didn’t necessarily have roots in reality.”

“There wasn’t a definitive “end of cold war” response in Soviet literature because the dissident literature, samizdat (self-published) and tamizdat (published over there), proliferated gradually. In the 1980s the Western spy novels all featured good guys from the West and bad guys from the East and they were still very popular. Margaret Thatcher read Frederick Forsyth’s “The Fourth Protocol” (1984) four times. But by this time there was also a huge influx of “real” fiction, serious literature reflecting on the reasons for the cold war and near nuclear disaster, the metaphysical opposition of East and West—post-modernism. This was a natural response to the cold-war situation, given the manipulation of language and the pervading atmosphere of counter-intelligence.”

“The CIA’s campaign to popularize the term ‘conspiracy theory’ and make conspiracy belief a target of ridicule and hostility must be credited, unfortunately, with being one of the most successful propaganda initiatives of all time.”

“Recent studies by psychologists and social scientists in the US and UK suggest that contrary to mainstream media stereotypes, those labeled “conspiracy theorists” appear to be saner than those who accept the official versions of contested events.

“The authors [of a new online study] were surprised to discover that it is now more conventional to leave so-called conspiracist comments than conventionalist ones… In other words, among people who comment on news articles, those who disbelieve government accounts of such events as 9/11 and the JFK assassination outnumber believers by more than two to one. That means it is the pro-conspiracy commenters who are expressing what is now the conventional wisdom, while the anti-conspiracy commenters are becoming a small, beleaguered minority.”

Literature must have limits

“Creative writing is an ethical question; literature, politics and pedagogy. … literature is a part of cultural achievements of a society and both get affected by each other.”

“Literature is a sub system of a society. It is perpetuated by the society and in turn affects the society.”

Therefore, and contrary to oft repeated arguments that literature ought to mirror society’s ailments, a Professor of English at Delhi University argues that such literature must have limits, because:

“Every piece of literature is propaganda and is always written with some intention. However the freedom that a writer enjoys should not be absolute or is not absolute. It has certain limitations and those limitations need to be respected…

…as literature itself is an embodiment of the various values, traditions and culture of a particular society, civilization or a nation which it cherishes and holds in high-esteem for several generations.”

SpyWriter Jack King, the author of:
Agents of Change, WikiJustice, The Black Vault, and The Fifth Internationale.
A new Pope. A new Church. A new world:

The dirty S word is back, and gaining popularity. Young Americans (ages 18 -29) are growing disillusioned with the capitalist system post 2008 crash, and look more favorably upon… socialism. The ideas put forward by Karl Marx are back in mainstream. Listen to podcast: http://www.cbc.ca/thesundayedition/shows/2013/02/24/is-marxism-facing-a-rebirth/

The survey by Pew Research indicates shift in perception on social policies, despite decades long propaganda war of vilification:

“powerful and wealthy private interests and special interest groups have taken almost full control of most democracies, their money and influence increasingly dictating the political and social agendas for these nations, agendas beneficial to them alone.

The management of these nations for the benefit of special interest groups has become so embedded that ‘socialism’, which is nothing more than a concern for the overall welfare of the nation and its people, has become a dirty word.

As evidence, most Americans are energetically, and sometimes almost violently, opposed to socialism though few appear to have any understanding of the term’s actual meaning.

Socialism – caring about the people of a nation and about their welfare, is equated in the American mind to a hateful dictatorship with no rights or freedoms – in fact, to the precise opposite of the term’s real meaning. Such is the power of propaganda.” From: http://www.spyghana.com/democracy-and-income-inequality-america-the-worlds-richest-banana-republic/ 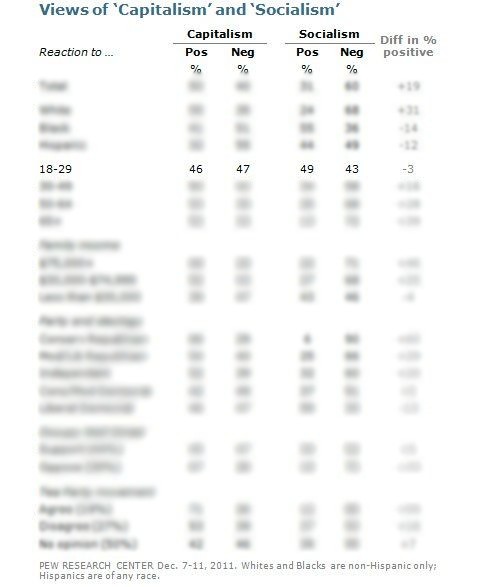 “The US military is developing software that will let it secretly manipulate social media sites by using fake online personas to influence internet conversations and spread pro-American propaganda.”

Propaganda program “will allow one US serviceman or woman to control up to 10 separate identities based all over the world.”

The military “stipulates that each fake online persona must have a convincing background, history and supporting details, and that up to 50 US-based controllers should be able to operate false identities from their workstations “without fear of being discovered by sophisticated adversaries”.”

SpyWriter Jack King “A new King of thrillers on the horizon” http://www.SpyWriter.com

“There will be, in the next generation or so, a pharmacological method of making people love their servitude, and producing dictatorship without tears, so to speak, producing a kind of painless concentration camp for entire societies, so that people will in fact have their liberties taken away from them, but will rather enjoy it, because they will be distracted from any desire to rebel by propaganda or brainwashing, or brainwashing enhanced by pharmacological methods. And this seems to be the final revolution.”

The final revolution will take place when you stop reading books. Pick one up now. Read. Free your mind. Free yourself.

SpyWriter Jack King “A new King of thrillers on the horizon” http://www.SpyWriter.com