How to foretell a dictator 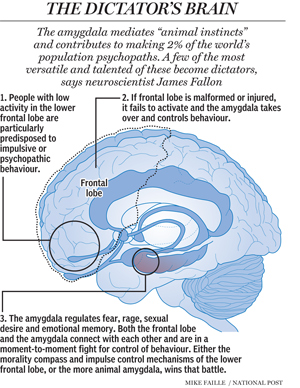 How to foretell a dictator? By scanning his brain (which, perhaps, should be a pre-requisite for all presidential candidates):

“They are usually charming, charismatic and intelligent,” wrote James Fallon, an American neuroscientist, in Psychology Today.

“They brim with self-confidence and independence, and exude sexual energy. They are also extremely self-absorbed, masterful liars, compassionless, often sadistic and possess a boundless appetite for power.”

Col. Gaddafi was “paranoid, narcissistic, power-hungry and vain,” he said.

After studying the behaviour of dictators, Mr. Fallon determined that genes, upbringing, abnormalities in the brain and a lack of empathy all played a role in forming such a person.

And, he concluded, “It is no coincidence that all dictators are men.”

This entry was posted in spywriter and tagged Dictators, Neuroscience, People, Politics, Science. Bookmark the permalink.